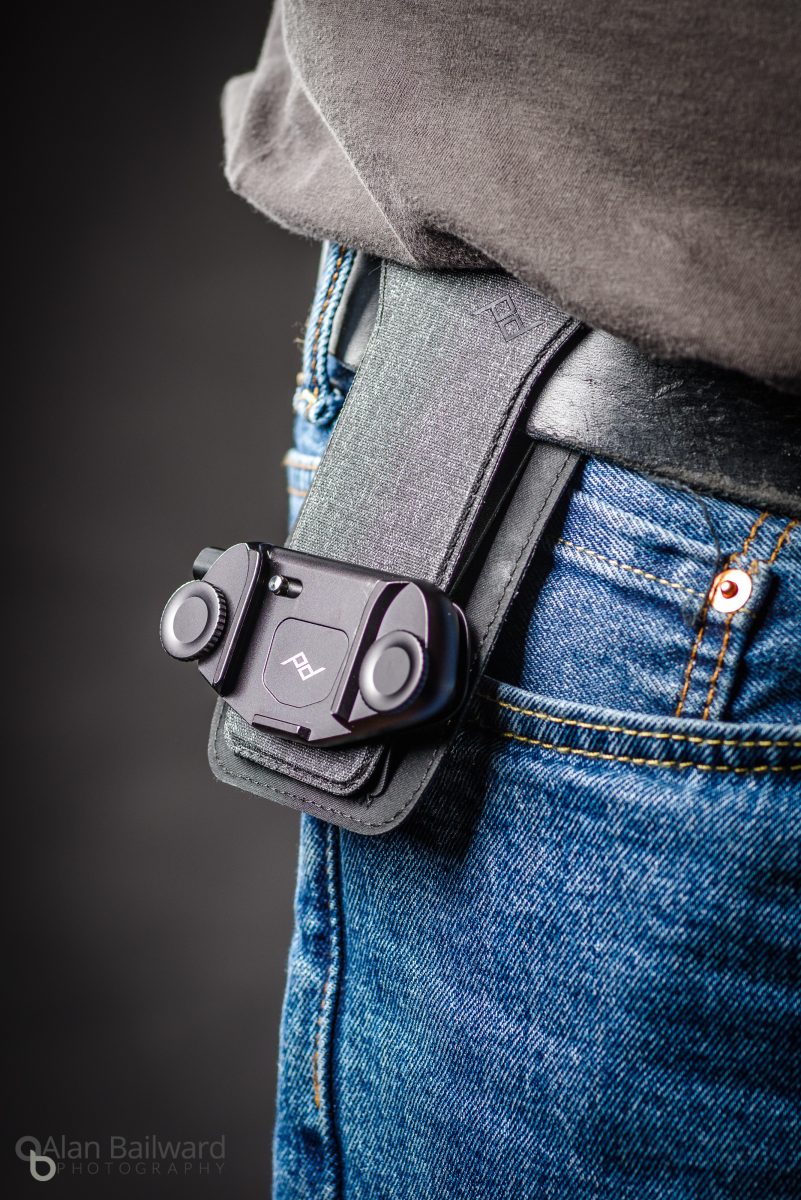 I have a confession to make. I’ve been a backer of Peak Design starting with the original Capture Clip back in 2012 when they had their first Kickstarter. I got the Capture Clip version 2 when they updated it in 2013. And now in 2017 I backed them again for version 3. 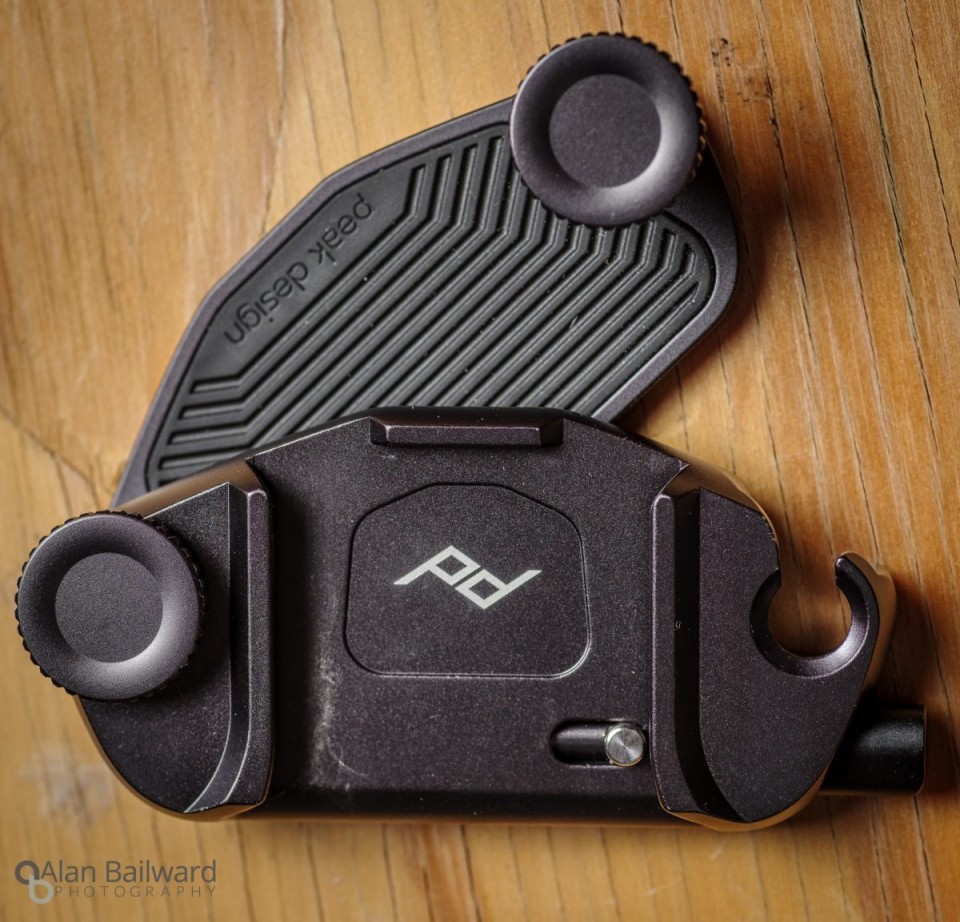 And tonight, as of this writing, late December, 2017, is the very first time I’ve ever used it.

I guess the first thing I should do is explain quickly what the Capture is. Or let the guys at Peak Design do it for me:

Capture keeps your camera rigidly stable while hiking, biking, or moving around the studio. Unlike a camera bag, Capture keeps your camera instantly accessible with the click of a button. Includes 2 components: a metal clip that clamps to any backpack strap, belt, or bag, and an Arca tripod-compatible plate that screws into the bottom of your camera. Your camera locks into the clip, where it is held rigidly and securely. Press the lockable quick-release button to remove.

Capture is a clip that, when paired with a metal plate that attaches to the bottom of your camera, will let you quickly slide your camera to it, and have it held securely, releasing the camera only when the button in the Capture is held down. The two main examples of this are attaching it to a backpack strap and looped around a belt, letting you carry your camera hands and strap-free.

The second thing I’ll get out of the way quickly here is to say that the hardware is absolutely beautiful. Well designed, solid feeling, sleek, and as professional as you will find. The guys at Peak Design have iterated on their process over the years and it shows. Capture v3 is the best Capture Clip yet. 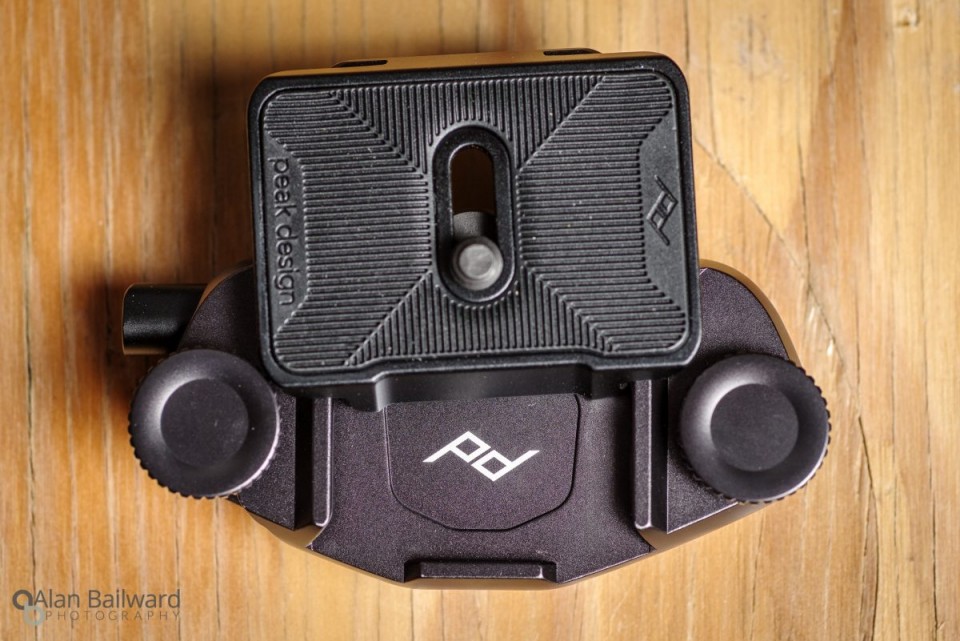 Every other time I’ve put the Pro Pad on my belt and clipped the Capture Clip in it and… well it just didn’t work somehow. Not in function, it did exactly what it was supposed to do, but it didn’t work for me. Anyway, I’d immediately go back to my camera strap (currently using their new Slide, that is something I’ve used from the second it showed up on my door) and think I’d always get back to the Capture Clip, but never did. 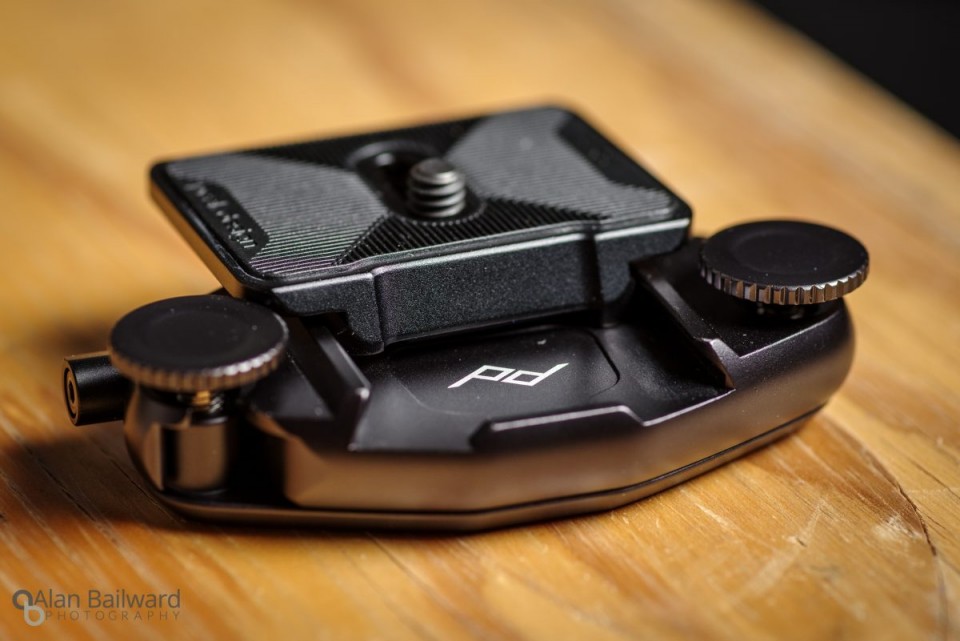 Part of the issue is that as a more… “rotund” gentlemen, there are a couple of issues that I just never bothered to try to work around or deal with. More on those in a minute. The issues themselves haven’t been fixed in the Capture Clip v3, but they seem to have been minimized a bit, or maybe I’m just giving it a longer shot and getting used to it more.

My Issues With Capture

So, the issues with previous Capture plus Pro Pad combinations: 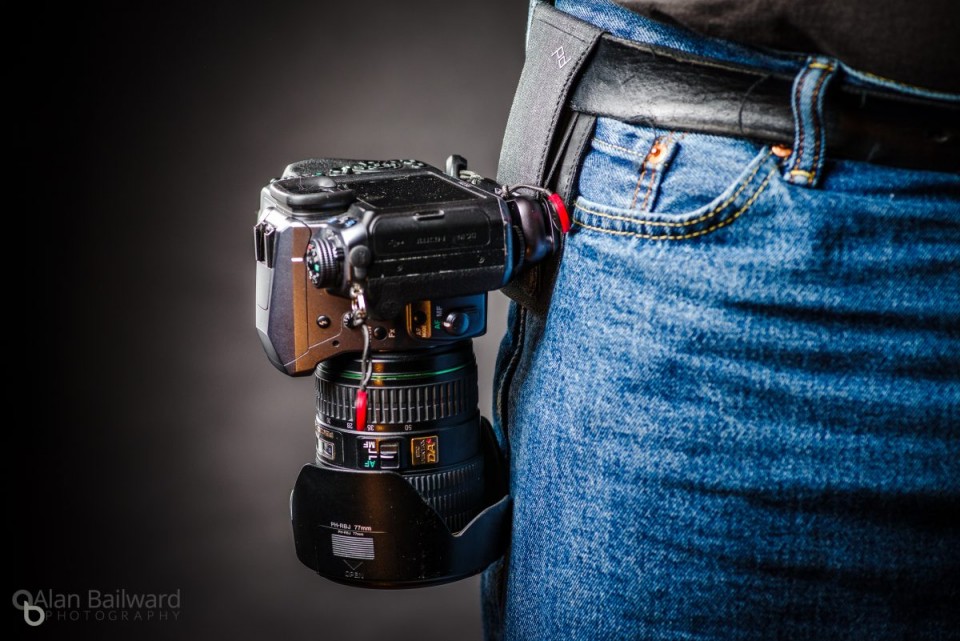 I wish I could write and say that the Capture v3 fixed all these problems. That none of these were a concern anymore. Or that if lost 50 pounds and the Capture was as easy to use for me as the svelte models in their commercials.

What has changed it that I’m finally giving the Capture Clip a fair try, for more than a few minutes. Tonight I’m shooting a hip hop show for Where It’s At Entertainment in my hometown of Maple Ridge and I brought the newest Capture along.

You know what? It’s not that bad. In fact, it’s kinda good, bordering on great. 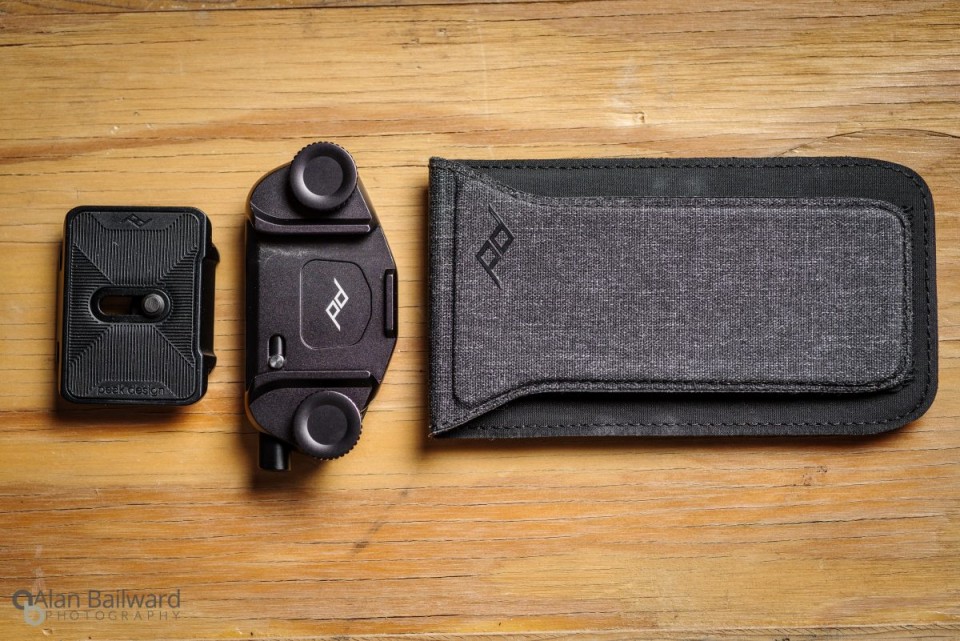 I see the Capture as an alternative to a camera strap for certain situations. Because of the configuration you’re still lugging a camera around at waist level or just below, and depending on the size of your camera it could widen your profile by 4-6 inches. Not a big deal hiking, but in a crowded venue a sling strap can sometimes be a better alternative, as it gives you the ability to quickly change where the camera is positioned on your body and relative to incoming obstacles (or drunken carousers).

In Real Life Use

Setting it up right

For the most part it was easy to pull up and out by grabbing the camera and simply hitting the release button. Ironically the only issues I had with releasing my camera from the Capture was when the cable on the anchor holding my Peak Design Clutch hand strap would snag on the release mechanism. Sometimes it would lay over the button in such a way that it either wouldn’t release properly or stopped me from pulling the camera up and out. This mostly went away as I got used to the “push button, pull up” motion as the night went on.

Putting the camera into the Capture is still something I need to get used to. It slides in and locks gorgeously, but with an expensive camera and lens on my hip I always give a little jiggle left right and up to make sure it’s actually in the slot and the mechanism has locked properly. 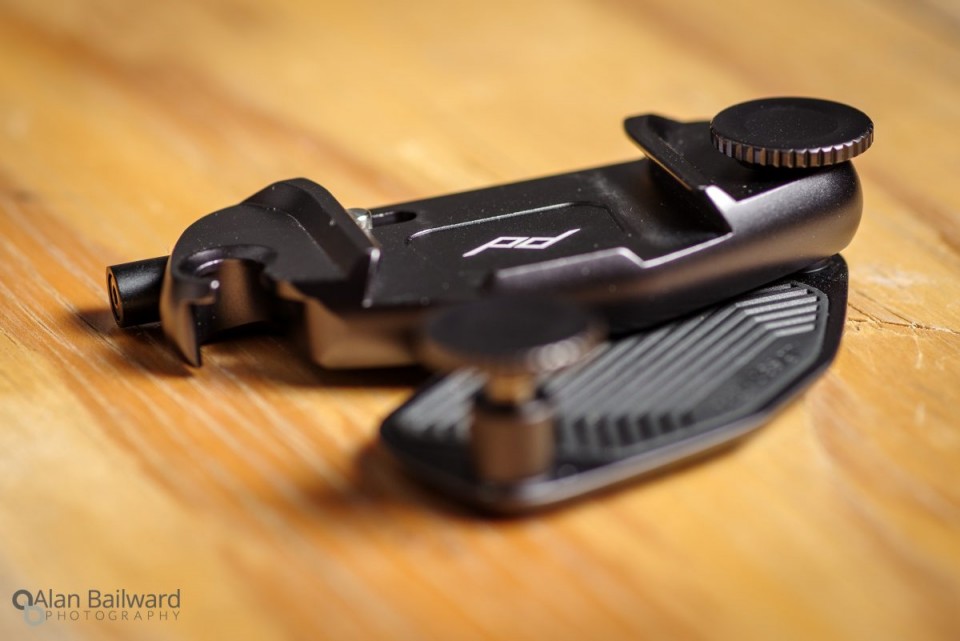 It’s not perfect. If I twist it in the wrong way the plate attached at the bottom of the camera can twist and leave you with a loose or twisted bottom plate. 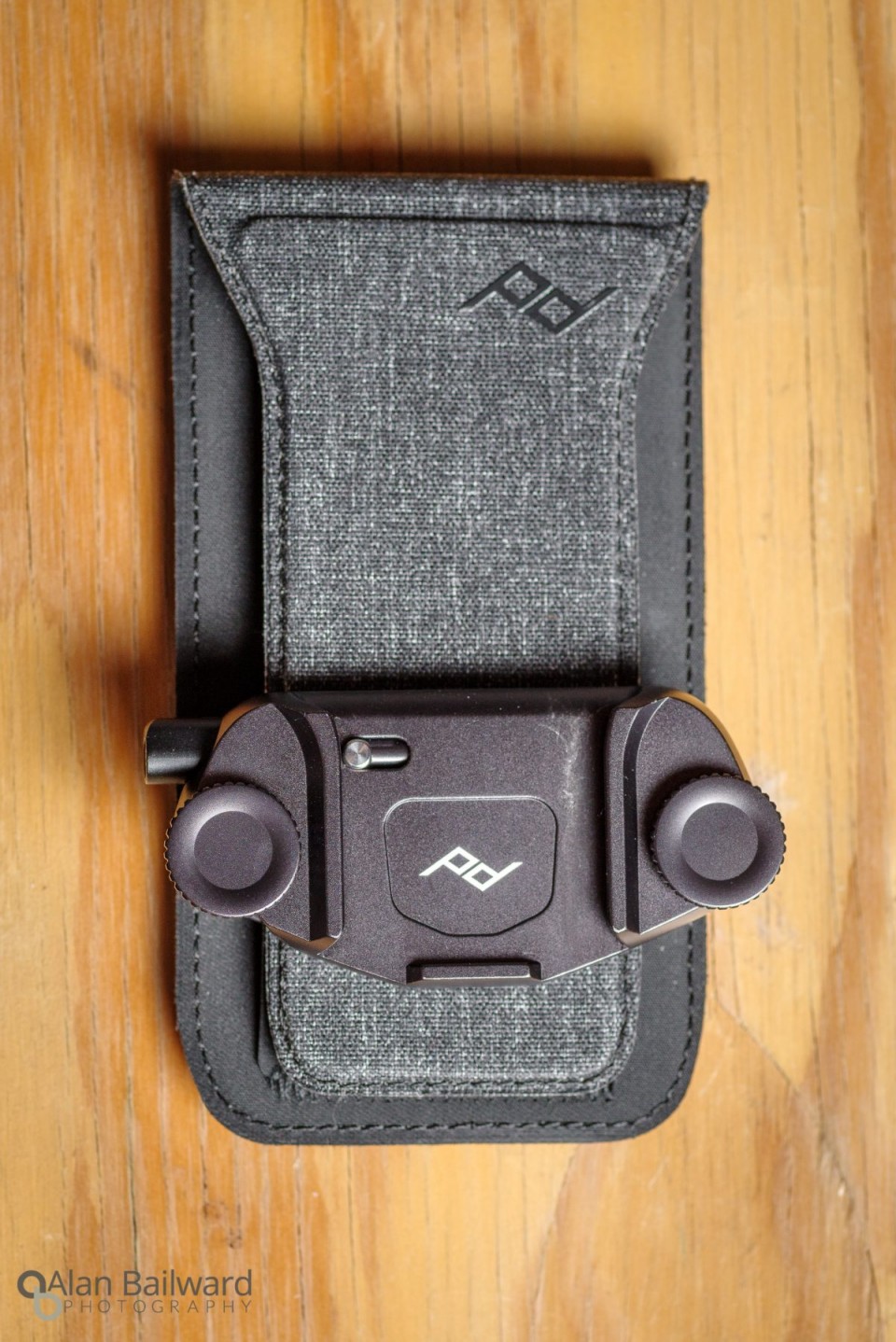 Not much to say about it. It’s smaller and thinner than the previous version, fits well and is padded enough to protect my leg from a heavy FA 24-70/2.8 banging against it. For now I’m just leaving the Pro Pad and Capture attached to each other as I don’t see using the Capture not on my belt for the foreseeable future. I already have the Capture v2 attached to my Peak Design Messenger bag, and, because Peak Design is awesome, the current (v3) Dual and Standard plates fit in the Capture v2.

The only downside here is that it feels like if you wear the Capture too low on the pad, the tail that goes over your belt could slip out. Now this hasn’t happened to me and I’ve never heard of it happening to anyone, but it’s the one thing that made me a bit nervous walking around with a couple of thousand dollars in camera hanging off it on my hip.

The simple solution though is to make sure the Capture isn’t sitting at the extreme bottom of the Pro Pad and make sure the screws are cinched down nice and tight.

Who Is Capture For?

The biggest question you and I have is “who exactly is the Capture Clip for?” More specifically is it for me? Sure it’s a great price of kit, but why would you want one when you have a neck or sling strap for your camera already?

Well, my first thought is backpackers and the like attaching it to shoulder straps. I haven’t used it like this but I definitely would if I i was into backpacking.

Honestly it’s about a different way to carry your gear. If you have a smaller camera, micro 4/3 or similar, the big issues of a heavy camera hanging off a bit of metal and off your belt go away. I did my testing with the Pentax K-1 and the FA 24-70/2.8 and I can tell you it’s not light even on a sling strap with lots of padding. Having 3.9 pounds hanging off my hip was different than off my shoulder wasn’t “better”, just different. It’s still a heavy camera, so there’s only so much you can expect it to do.

I think that for some people they might prefer the clip as a way of carrying gear over a strap for events or landscape photography. At least having it as an option gives you a different way to do it if your shoulders just can’t take it anymore 🙂 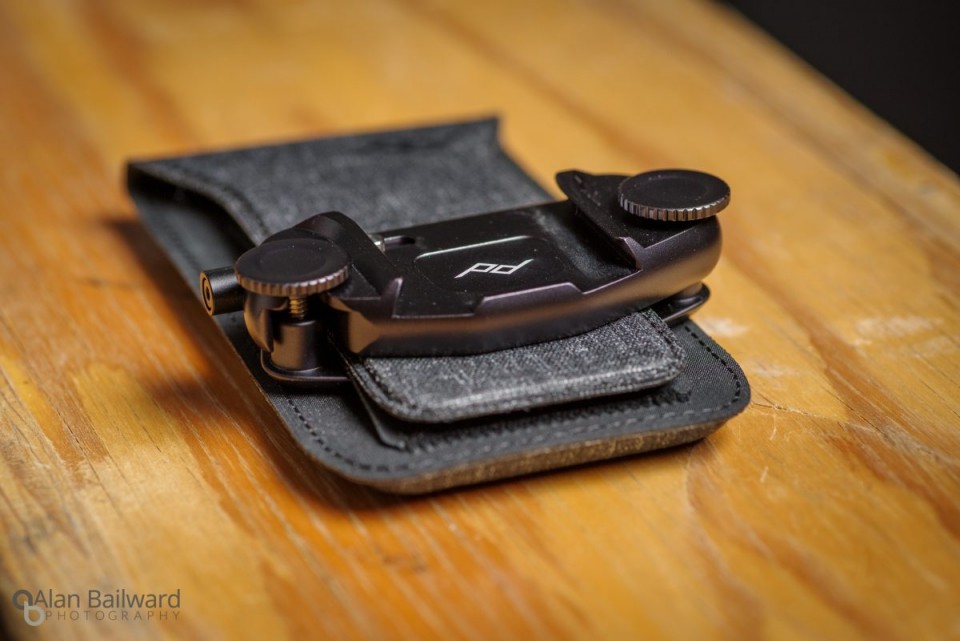 While it definitely doesn’t solve all my issues, but the overwhelming guilt of having spent hundreds of dollars on Peak Design gear and never using it finally got me to give it a shot, and I think I’ve really found a place for it in my physical workflow.

You can buy the Capture Clip, Sling, Clutch, and everything else from Peak Design through my link here. If you spend more than $65 you get a special gift included in your order. 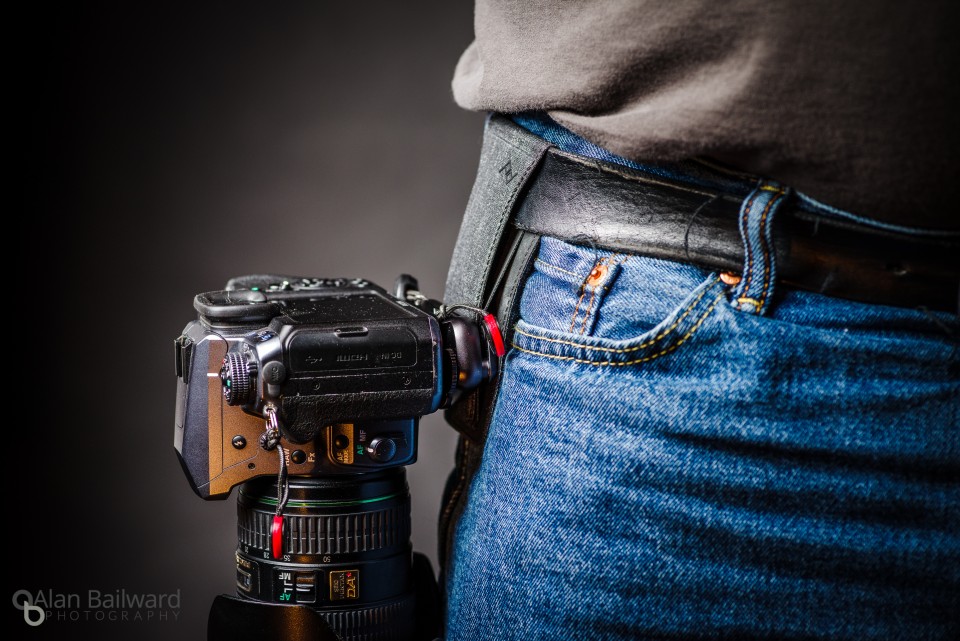 Note: You probably won’t be surprised to hear that no gear was provided by Peak Design, I had to buy it all myself. Some links on this page are affiliate links to Amazon and the like, so you can support me a tiny bit by clicking through using them!