I wear a lot of hats as a photographer, and there are certain genre’s that I gravitate towards, and some that I even do not too bad with.  There are also the jobs that you take because you need the jobs.  One of these type of jobs is shooting hip hop shows and rap battles.  I got into it through a co-worker who is a battle rapper, and put me in contact with a promoter who runs Where It’s At Entertainment.  Long story short, I now shoot a lot of the big events that they throw.  I won’t lie to you, the money isn’t that great.  When you do the actual calculations (1 hour drive x 2 + 5 hours shooting time (7pm-midnight) + 1-2 hours selecting and editing), the money sucks.

So why do it?  I’m not into hip hop music.  The rap battles are interesting, but I wouldn’t go to them on a consistent basis outside of this.  I’m jammed into a pizza joint in downtown surrey with a bunch of early to mid-twenty-somethings whom I have nothing in common with, alternating between playing scrabble on my phone and shooting whoever is on stage.

But sometimes I get a photo like this one. 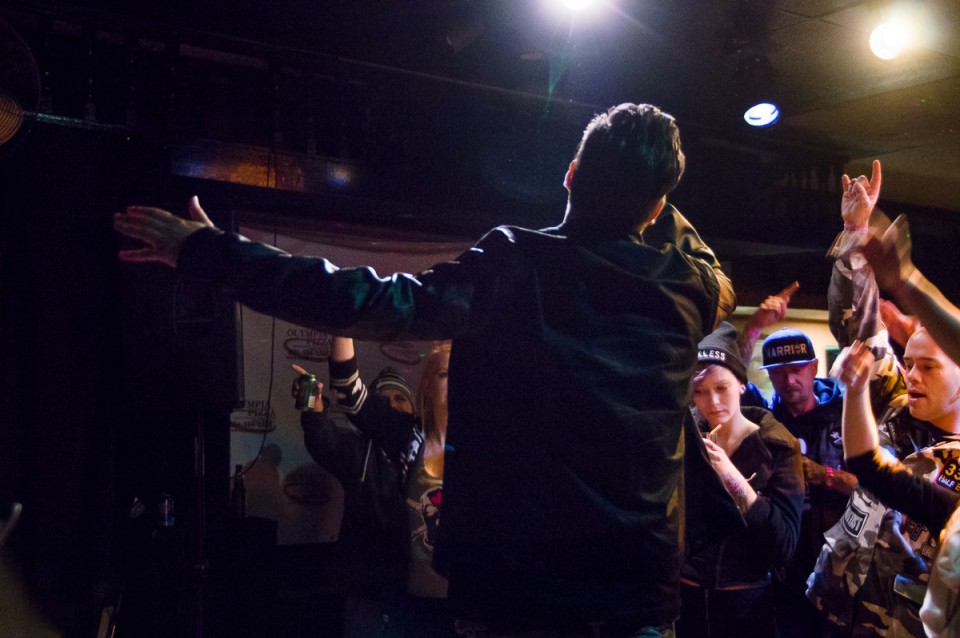 This is a guy by the name of “Evil Ebenezer”, a guy who’s real name I don’t know (unless his parents really didn’t like him, and who’s hand I’ve shaken a couple of times.

At the end of his set on Friday night he threw his arms up to the cheering crowd of about 50-100 people, and let the cheers wash over him.  The look on his face was amazing, something I doubt I’ll ever be able to properly capture.  He loves what he does.  You could almost feel him absorb the energy in the crowd.  Maybe it’s something that has been wrung out of top end artists playing stadium shows to thousands of people, or it just shows up differently. The thing is, it’s not just him.  At the start of the night they put on the less popular acts, and I’ve seen that same look from a 17 year old kid doing his thing to a crowd of 5 people.  The artists are there doing what they love, really doing what they love.

And I love seeing that.

Even with the crappy drive.
Even with the long hours.
Even with the crappy pay.
Even when there’s a big act that has 300 people crammed into a space for 100 with the temperature approximately that of the rainforest from body heat and sweat, where I have to lift my camera over my head and pray that it’ll at least catch focus as I use it blind because I have about 3 inches in any direction I can move.