Why Do You Hire a professional photographer?

(You’ve got 99 problems and the Photo ain’t one)

You don’t hire a photographer to take pictures.

Really, you don’t. Anyone can take pictures. It’s just clicking a button. Oh sure it’s a bit more than that, but not that much. You can learn the rule of thirds, a bit of practice, learning to see the direction of light, and that people seem to like pictures with blurred backgrounds… It’s really not that hard. For under $1000 you can get a great camera, and with a bit of web surfing you can probably get 70% of the way to taking good pictures. 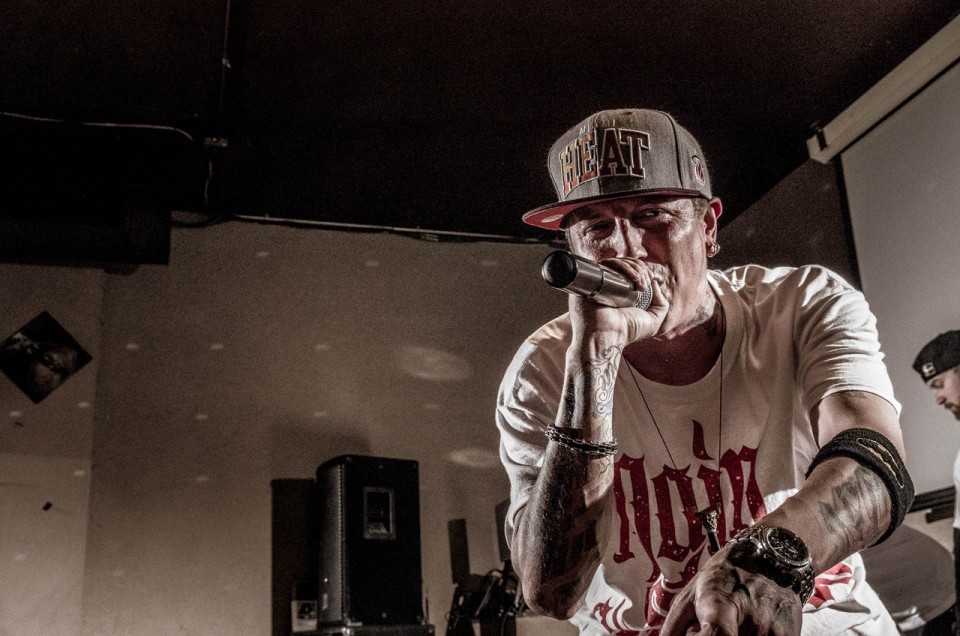 No, you hire a photographer to be a problem solver.

Well… a problem solver who can also take pictures.

Right now I’m standing in The Wolf Bar in Maple Ridge. I have earplugs in and there’s a lanky white guy on the stage rapping really loudly. Or so I’m told. I’m over 35, so it’s a lot of yelling into the microphone to me. I was hired to take pictures of the performers tonight by the friend of a co-worker. It’s not a big job, but i0t’s close to home, and every little bit helps.

Where am I going with this?

The bar is a black hole. Here’s a picture of what’s going on right now.

I just took this picture. You can’t see it, but there a guy with an amazing mullet to the right of the stage.

This is the sort of location that makes photographers quake in their boots. No spot lights, just the horrible lighting normally found in a bar (great for eating, not good for photography), and one back light which I’m pretty sure it came from Ikea.

Good thing I grabbed my bag of flashes and stands before I left the house.

Flash triggers to let me wirelessly trigger the flashes from my camera, and only one works. Damn.

Good thing I had a box of AAA batteries in my bag.

Flashes should be ok, but they’ll be firing from nine till midnight or 1 AM. That’s going to drain a lot of battery. Good thing I have a bag of spares.

Next step, lighting the “stage” is going to be challenging. In order to get good photos, I need enough light to cover the performer and still make it look decent. I need to have some drama, but deal with the performers moving back and forth across the stage.

I decide on fairly simple cross lighting. One flash on a stand at medium height, zoomed to maximum to create a tighter light, which gives a “spotlight” look behind the performers, pointed towards the center of the stage. I put a second flash in front of the stage pointed towards it, zoomed in a bit (24mm), up high and pointed down. This gives decent coverage of light without that “deer in the headlights” look, and let’s me duck down and shoot up to eliminate shadows behind them on the wall.

I take a few test shots. Not bad. Not a good representation without a performer on stage, but I can see it will work. Rear flash at 1/64 power (very low), front at 1/16 power (a bit brighter). TTL flash (“Through The Lens”, meaning the camera will tell the flash to output the right amount of light to light up the scene properly) might work here, but I’ll use manual right now so it doesn’t try to light up the whole room and drain the batteries faster.

Now I have a $600 flash sitting on the edge of the stage where a bunch of rappers will be wandering and drunk fans will be dancing. The flash is perched on, well, I won’t say “cheap” flash stand, so let’s say “flimsy” (nothing but the best that $16 can buy).

They say duct tape binds the universe together, and a few requests to the bar owner gets me enough to jury rig my little flash enough that I’m not completely paranoid of it falling off the stand if someone bumps into it. 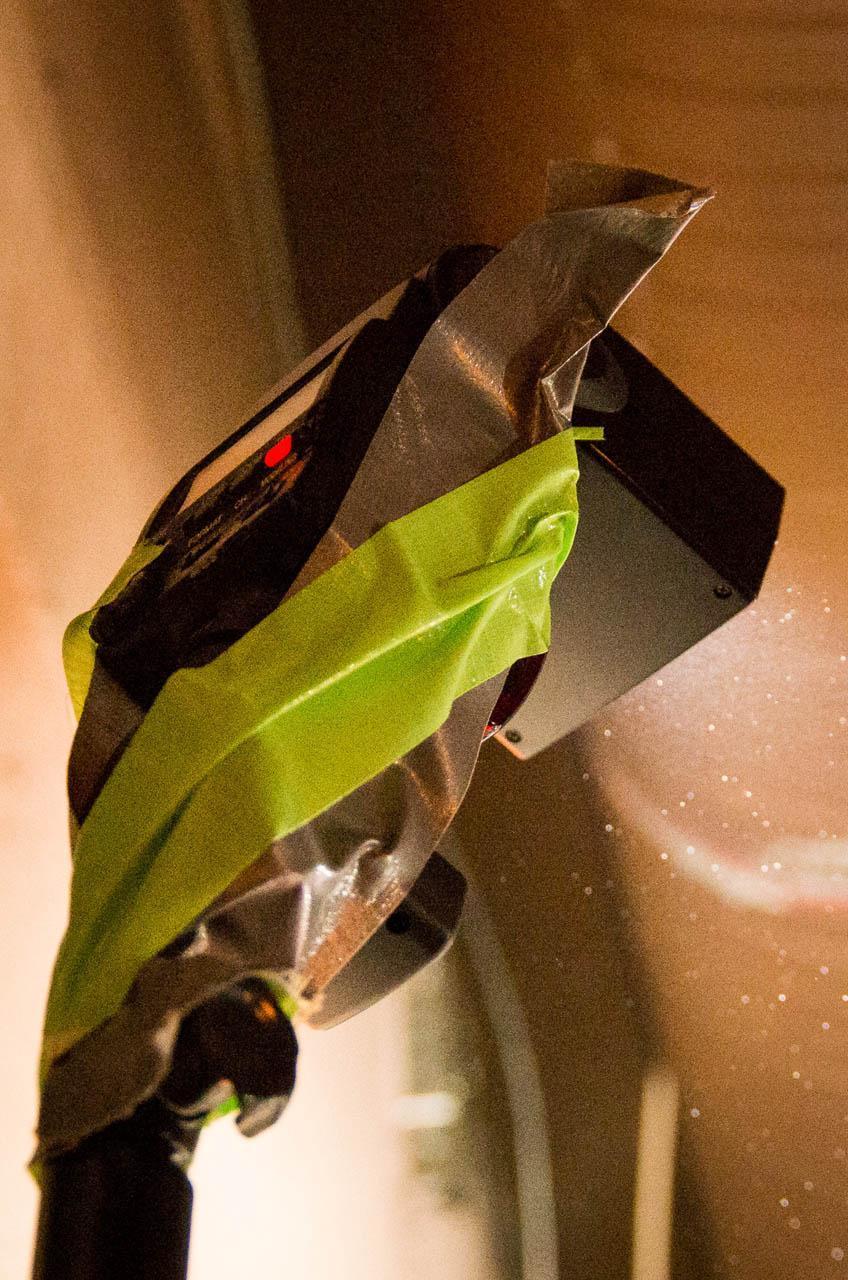 That isn’t the end of the problems.

Angles. Where’s the light coming from? How will it look hitting the performer? Shadows from the audience? Who knows? How’s the rear flash looking? Is it looking like stage lights or like a big old blob of light?

First couple of performers go on, and the pictures look OK. Whew

A random girl dancing in the intermission, grabs and hugs me and tells me she wants a selfie and I fumble to get my DSLR turned around.

The picture is almost completely black, because she apparently isn’t thinking about where the light is coming from while she drunkenly touches my beard. Hmm… Best not mention that to the wife, the beard is her zone. I’ll try to fix the picture in post anyway, but I don’t have high hopes for it. 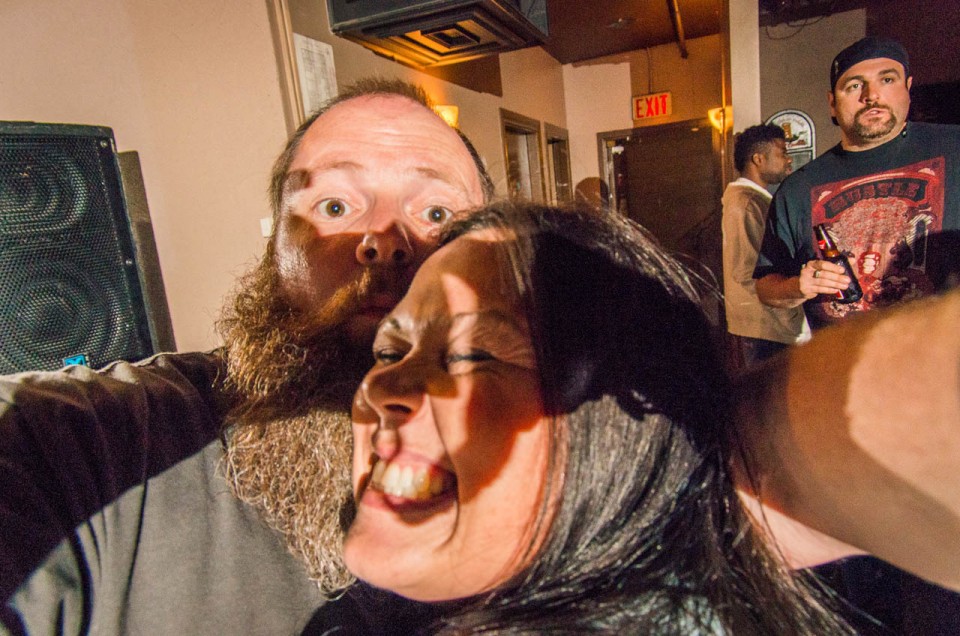 Move and shake more. Get the right angles. Time the shots so you don’t get the “singer eating the microphone” look (I’m still working on that). Keep the flashes in mind. Hope they’re still recycling fast enough. Ride the aperture setting to adjust how the flash power influences the shot. Adjust the ISO as well. Dodge and weave like a linebacker to avoid the crowd, or for getting in the artists’ faces too much and disturbing them. Make sure you get them from a few different angles, and if there’s more than one ride the ISO and aperture to get enough depth of field so they’re both in focus. Try keeping them both in the plane of focus. Easier but more or less interesting shots? Chimp a bit. Camera review function has a “quick zoom” custom setting to help check focus. Weave some more. Work the angles to get something interesting. Try high. Try low. Tight. Wide. Behind with the crowd in view. All of the above. Again. Again. 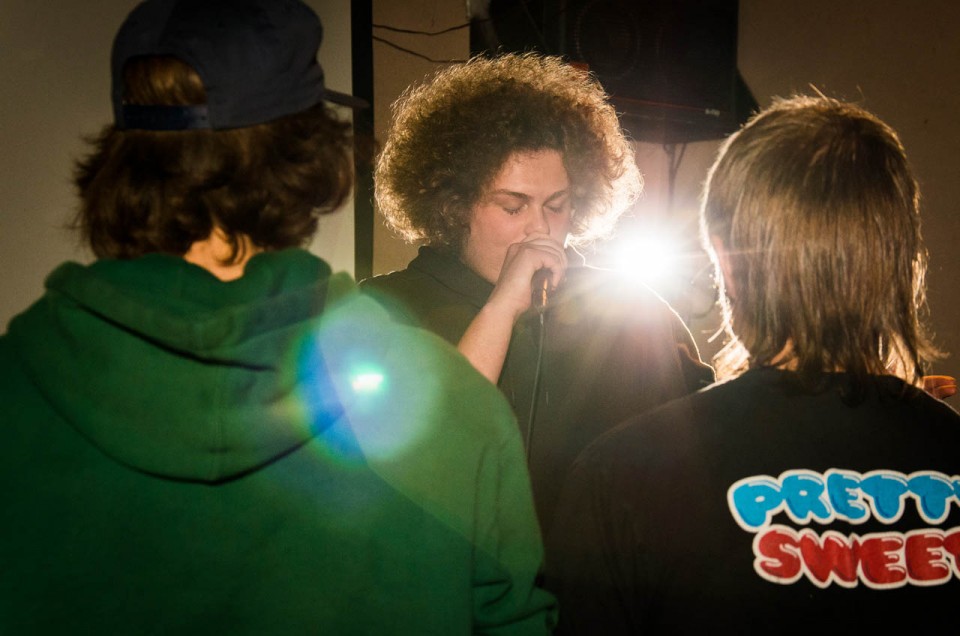 Next artist comes on stage. Repeat.

Write some more of this blog entry when I know I’ve got good shots. Keep an eye open for the “moment”. Crowd reaction. The guy with the iPhone instagramming the show, try to get a shot of the screen with the artist behind and out of focus. A high five. Synchronized movement. A great pose. Wait for the magic moment and don’t miss it. Crap. Missed it. Try again. And again.

Earplugs. So glad my wife reminded me to bring them (after I complained last time about not having them). They only partially block that wall of yelling that is what the kids are apparently listening to these days.

Go outside between sets to get some fresh air. The smell of pot is pretty thick. It is Maple Ridge after all. Glad it doesn’t bother (or affect) me. Avoid the guys smoking pot. Avoid the cigarette smoke as well.

My buddy Mike gets on the microphone to let everyone know the next act is up. Go back inside. Repeat. 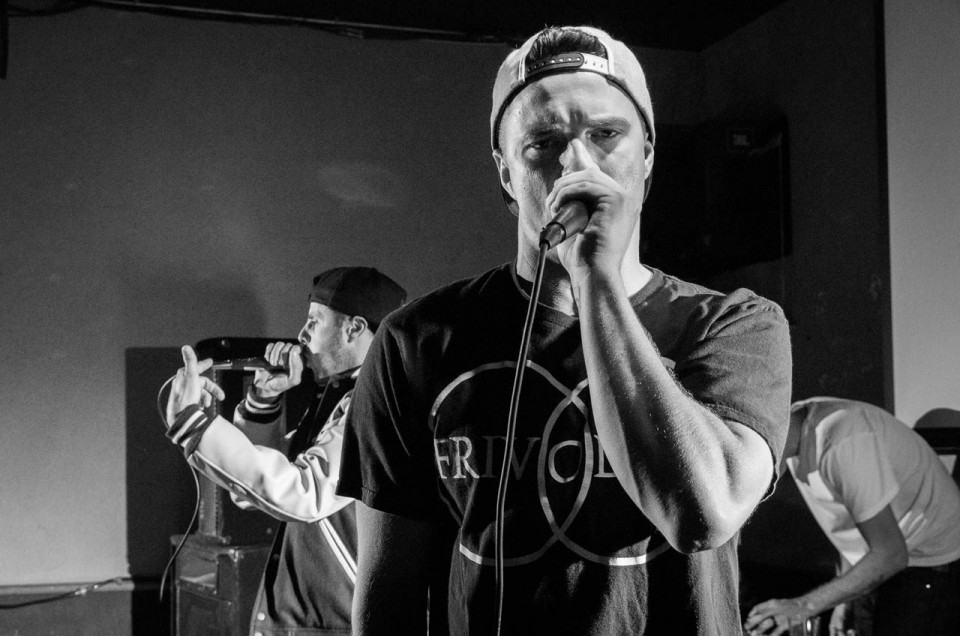 What about the pictures? I said anyone could do it, it’s just pressing a button right? Well, you still have to make them look good and deliver them. Sure, you can just dump your memory card onto a DVD or Facebook or Flickr and call that “delivering to the client”, but that’s creating it’s own problems isn’t it? More problems to solve.

Around 2AM I’ll get home and will offload the images to my main computer. Templates will make sure files are named right and metadata is added. I have presets to get the “rap battle look”, then in the morning I’ll go through and select a few images of each performer, some crowd reactions, and filter them into a “to edit” collection. There they’ll get a quick look, crop, adjust and then be tagged “yellow” to let me know they’re ready to go. Some of the “hero” images will get some extra attention and maybe a separate treatment of black and white or a hit of the Dragan style.

Now how to deliver the images? 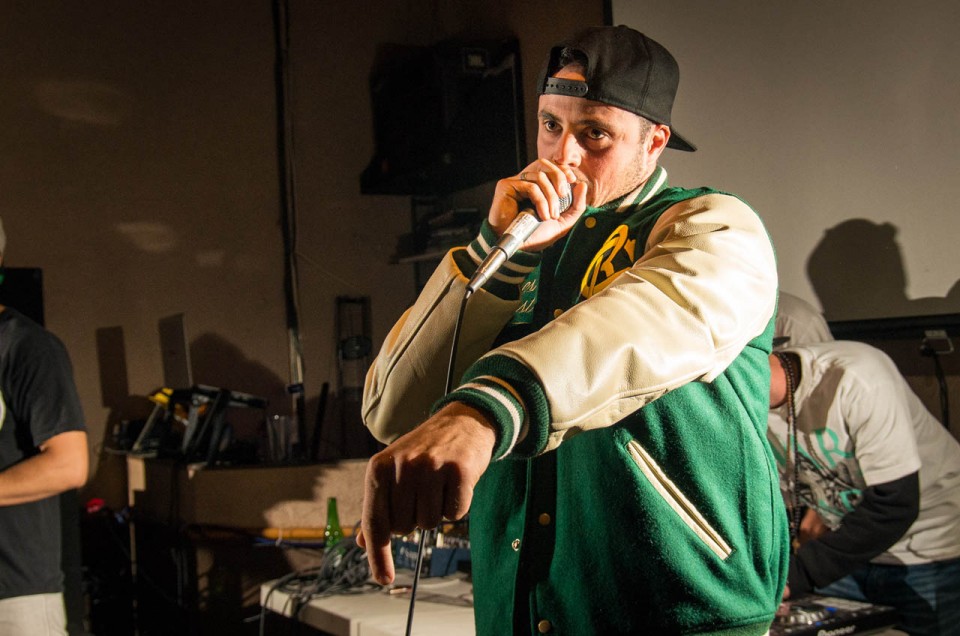 Export presets take care of most of it. Renaming, watermarking, and creating a JPG file all from one click of the mouse.

Oh wait, the client needs more than just a watermark in the bottom corner, they need a watermark in the top left, bottom right, and bottom left. Ugh. Lightroom can’t do that in an automated fashion, it can only do one watermark per image export, and I don’t want to re-save the same JPG four times.

Get the watermark files from the client, load up Photoshop, create an action to place the watermarks (something like this. Great, now load up the Image Processor and run that action. Now I have the images, finally exported and can post to Facebook and tag the performers. How? Because I remembered to get a copy of the schedule so I knew who’s who.

Back to the present for a second, where a drunk guy just walked over my flash. I was there and grabbed it just in time before it made a very expensive “splat” on the ground. Whew. 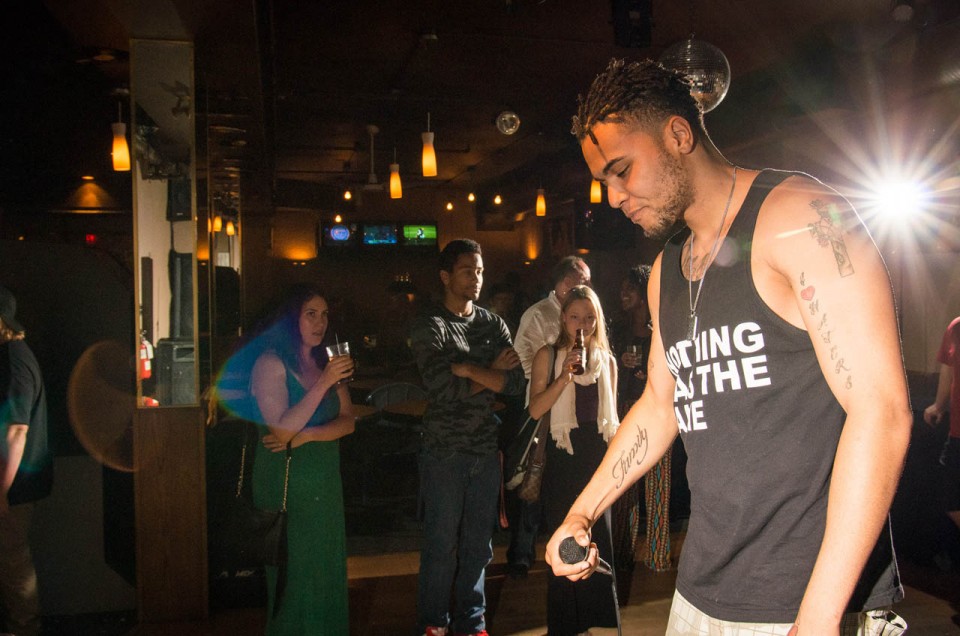 What if it had fallen over? That would be problem #128, but because I come with spare everything, I have two more in the car.

Just in case. Because I’m a professional.

Because you want your photographer to be a problem solver.

Because you need your photographer to be a problem solver as well as someone who knows how to snap the shutter.

It’s long been said that professional photographers aren’t professional because their photos are that much better, but because they’re that much more consistent. Talk to any photographer who makes their living with a camera and they’ll be the first to tell you that they make their living not because their pictures are better than the weekend warriors out there, but because they’re consistent in the quality of their work, their blogging and social media, and dedicate a large part of their time to running their business.

More so because when they get given that crappy job, where the problems are hitting them like Muhammad Ali from left, right above and below, they can roll with it. They have the experience to pull a pose, some lighting, or cool effect out of their bag of tricks. They have the gear so that when the flash, the backup flash, and the backup backup flash all decide to go to electronics heaven on the same day, they have another one in the bag. They don’t get paid because they are hitting a button, they’re paid to solve the hundred problems that they’ll hit before they get to.

Having someone who can solve problems means that you get a more consistent end product. Instead of ten great pictures out of a hundred you get eighty. Instead of having to cancel a photo shoot when the batteries run low or the flash falls over or the lens jams up, you just keep on going. You end up with someone who you know you can call and have a job well done every single time. That’s what you get from a professional.