I hope everyone had a great thanksgiving, and are stuff with turkey stuffing and good food and family.

I thought that I’d start off today with an explanation…

Many of you follow me on social media, such as twitter, facebook and Google+, there have been some new cameras released lately, and I’ve had thoughts about switching to some different equipment.

Before I talk about my reasons for sticking with Pentax I want to make some important things very clear.

I’m not sponsored by Pentax and never have been. I’m also not sponsored by Nikon, Canon, Sony or Leica. Frankly I’ve never been approached by any of them, and if I was I’m sure I’d take their gear. Honestly, if someone came to you and said “want to use this expensive thing free of charge?” you’d do the same. However, I’ve never had the option, so it’s a moot point. The real reason for me continuing to use Pentax gear is that it’s what I believe is best for my business and how I work and shoot.

I know that one camera really makes better images than others, at least within reason. Of course a top of the line Nikon D800 will be sharper than your camera phone from 2004, but you know what I mean. I also have friends who shoot Nikon and other friends who shoot Canon. I respect their lifestyle and think that they are fine photographers in their own right, and make images that are just great. I even know someone who uses a Sony. I know that’s odd, but in society today it’s getting more acceptable. I have just as much respect for her as I do any other photographer. When I’ve spoken to these Photographer Friends of mine, and discussed how I’m not going to change my camera gear, no one is more surprised at the lack of change than me, because I’ve been with Pentax from almost day one of using a digital camera. I’ve owned several and they’ve all served me well, and I never thought I’d need or want to change. Well, not really. Who hasn’t had a case of gear lust looking at the latest whiz bang new body, lens or flash and thought “if only I had that, I’d be able to shoot like that too”. But other than that I’ve been solid as a rock.

Everyone says it’s not the camera that makes the photographs but it’s the photographer, and I completely agree, and the reason that I’ve decided to stick with Pentax is really just a few main points, which I’ll explain below.

Quite simply I like the Pentax range of lenses that are available to me. They turn the right way, and even if the lens hood markings could be a little more clear for when you’re putting the hood on backwards, that’s about all I need to say. Nothing groundbreaking here, no pouring out of hatred or even dislike for Canon or Nikon lenses, even if there is more current development in them. Still though, being that I shoot Pentax, I have a bunch of Pentax lenses. No “*Pentax is better than Nikon*” hooey, just my reasoning why I felt the need to stick with the brand I already have.

Ok this is really on Pentax and isn’t the fault of the other companies. While Nikon and Canon are putting lots of interesting things into their cameras, they really don’t have the freedom to just play with technology. Pentax doesn’t have the weight of the 80% (or whatever it is, I’m just pulling numbers out of the air here) of the market on their shoulders which gives them freedom to do some crazy things.

An Antialiasing filter that can be toggled on and off on the new K3. High end weather sealing on all their DSLRs. Lens compatibility back to 1975 (and earlier).

Every time I’m actually shooting I remember that the gear isn’t going to change the photographer. Sure, at a certain level you need to move from one level of gear to another. If you’re going to shoot billboards you probably need something more than a 6mp DSLR. If you want to shoot crazy sports for Sports Illustrated or the like you’ll need a camera that looks like a cannon. I’m not doing that, so there’s no need for me to throw $10,000 out the window to re-buy all my gear and still be the same photographer behind the shutter.

I’m excited to still be shooting Pentax on my K5iis, my camera of choice and the amazingly good DA*16-50/2.8 and the DA*50-135/2.8 as my walk around lenses; be assured that I’ll keep you posted with how it continues to go.

I hope you can understand my reasons, and that it is a 100% business and work decision, as when it’s all said and done the most important thing that the gear allows you to do is what you want and what you need to do, and there’s no point in buying into a whole new brand ‘*just because*’… well, that’s what I think anyway.

Talk to you soon, 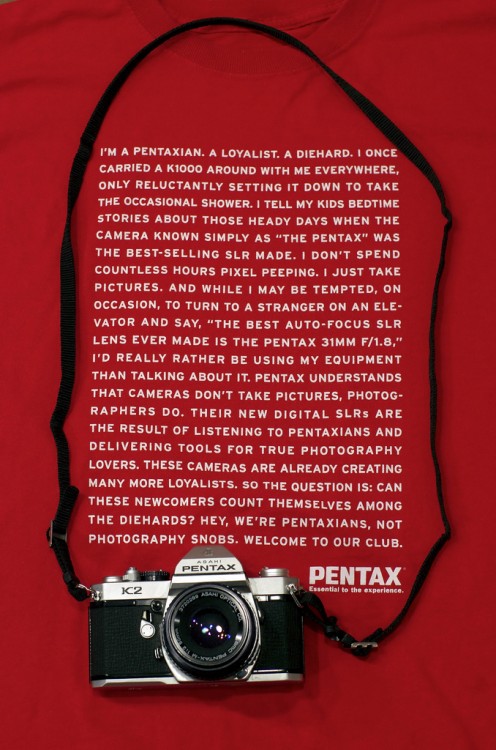 (Note: This is a parody post, written after reading countless, breathlessly written articles about moving from Nikon to Canon (or was it the other way around), in which photographers seem to think that the world at large cares what camera they use, and that it’s so important that they have to write an 1,100 word article about it.)