I’ve been a Pentax shooter as long as I’ve had an SLR. My dad gave me an old Pentax P30T

as my first digital SLR a few years later, then to the Pentax K20D

) in 2008. At the time it was a DSLR monster, 14 megapixels, built in shake reduction and a speedy AF system and blazing 3 FPS.

As with all technology, five years id a long time. All that speed had somehow disappeared and the K20D felt sluggish, and while I knew that a different camera isn’t going to make me make better pictures, I lusted after something new and shiny. I whinged about jumping to Nikon, with their super-fast AF system and the D600’s 24 megapixels of full frame goodness 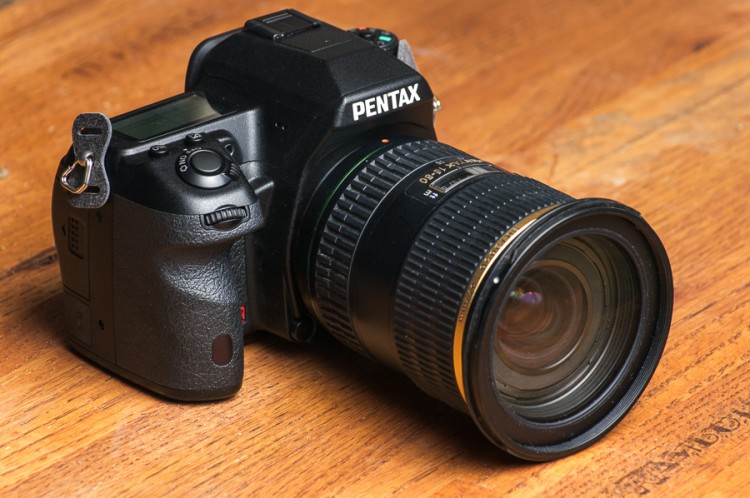 I decided on the “S” version of the K-5ii, with the same 16 megapixels, but missing the anti-aliasing filter of the non-S version, allowing sharper images with a higher rise of moiré. I figured for studio portraits, the extra bit of sharpness would be awesome, and the moiré could be mitigated in post processing.

Anyway, enough about me, what about the camera. I have had it in my hot (very hot) little hands for less than a week, but here are a few thoughts about it, mostly in relation to the K20D and the differences in it.

The three things I wanted most from it, and which had me looking at Nikon were:

First and foremost, image quality is excellent. Not some sort of mind-glowingly different quality, as I’ve heard that moving to Medium Format will give you, and I haven’t done side-by-side pixel peeping, but the shots I’ve taken seem to be the high quality I’d expect from Pentax, or in fact, any modern DSLR. The extra-sharpness (“S” must stand for “sharp”) isn’t immediately apparent, but I’m sure it’s there. Again, I’m using it here as a “real user” not a studio pixel peeper.

Additionally, the camera handles highlights and backlighting well, and seems to do what I want it to do without having to muck around too much with adding plus or minus EV compensation. I did find it tended to expose towards the centre to protect highlights, resulting in underexposed images. I found I had to add +0.3-0.7 or so to the evaluative metering either with EV or in post. This is a Pentax thing though, and for users of the rest of the line it will be as expected.

I also don’t know if I should attribute it to the better image processing engine, the better autofocus, or that I was taking shots in mostly bright sun, but I found I had far more keeper shots than before. No hard numbers, but the overall feel that there were less out of focus, missed focus, or just plain blurry and reject shots than before.

Autofocus speed is good. AF speed has been my downfall lately with the K20D, with it’s handling of moving subjects not being the best (to say the least), and I felt lately like I was really missing a lot of shots with the AF being too slow to catch the action, or missing a great expression or moment while I am waiting for the AF to get off it’s butt to lock on, even with a modern SDM lens like the DA* 16-50/2.8

it seemed to struggle.

The K-5ii has mostly fixed that. It doesn’t feel as snappy as the Nikon, but it’s definitely a marked improvement from the K20D and seems to lock faster and with more confidently. I haven’t had any issues in low light either (or even dim light) as with my last SLR body. It’s not as accurate in it’s continuous AF and auto-point select (the Pentax version of Nikon’s “3D” mode) in tracking moving subjects, but it’s a marked improvement. The big test with be the next sports even that I head out to shoot. I have had a couple of the “I have no idea what you want me to focus on” moments even with me telling the camera exactly what I wanted it to focus. Fixed by un-zooming a bit waiting for lock-on, then re-zooming. Twice in ten days of hard, several hours a day use that isn’t bad, but hopefully not something I’ll see more of.

Still, it’s much better and that’s the big thing that I wanted.

The body isn’t as light as I thought it would be. Maybe it’s the bulk of the honking huge chunk of glass that is the DA* 16-50/2.8

attached to the front that’s doing it but I honestly expected it to be a bit smaller. I’m halfway around the world from my camera drawer right now, so I can’t compare it against the K20D, though I suspect I’ll find it lighter, but not that much lighter.

I did a bit of testing in good light before I left on my trip to see how it was, and it seemed to be decent on a well exposed image up to about 3200. On the K20D I’d feel fairly safe shooting up to about ISO 800 before I’d worry about noise reduction. On this trip I shot up to 1600 without too much worry, and 3200 in low light. Under-exposed shots at high ISO work the same as any other camera, they struggle if you bump up the exposure too much. I think that the K-5ii will do fine if you’re not doing stupid things, and that if you can get a well exposed shot, ISO 6400 is probably where you can still get something decent without having to max the noise reduction.

Anyone coming from another Pentax DSLR will be perfectly at home with the K-5ii. The button layout makes sense and the grip feel and build quality is great. I did struggle sometimes with some of the new button placements though.

My fingers still reach for the lower left for the review/play button where it’s now on the upper left.

My right thumb is still reaching for the centre button to adjust the ISO with my right finger, where now the roles are reversed and the right finger now has the ISO button while the right thumb wheel adjusts it. Ditto for the reversed EV +/- button.

I’m not a fan of the live view button at all. I don’t have a need for it, don’t want it, never use it, and yet it’s right under my thumb most of the time. 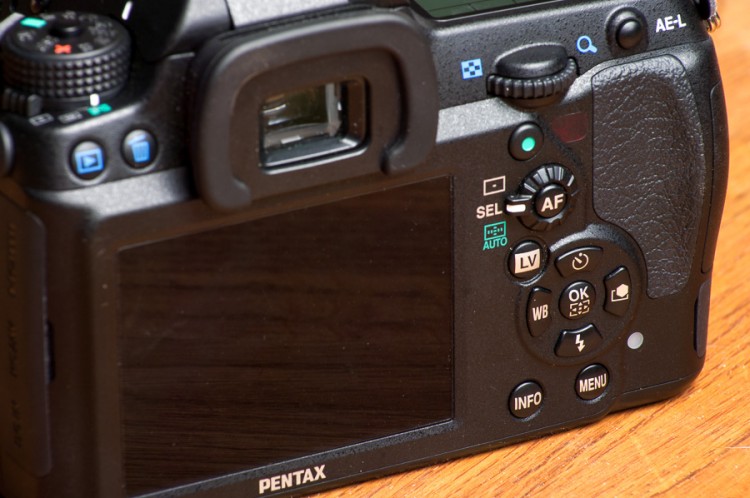 I’m also not a fan of the way the new four way controller button works for autofocus selection points. On the K20D you put the camera in AF select mode and then the four way controller moves them. Hitting the function button would get you the menus for controlling white balance, drive mode, etc.

The new model doesn’t have room for a function button so the four way controller and centre (“OK”) button do both. To go from settings adjustment mode to AF point selection mode you hold down the centre button for a second and wait for the beep to indicate you’ve changed modes. Problem is that it seems pretty easy to go from one mode to the other, and a couple of times I found myself suddenly setting my white balance to a random mode while I was trying to select where to focus. Sometimes it’s not a matter of just hitting the OK button to get from mode to mode, making it sometimes frustrating. There isn’t an indication that you go from one in the viewfinder either (that I tell).

These are mostly just a matter of adaptation and my fingers re-learning their jobs.

Nothing is ever perfect, and no review of mine would be complete without a bit of complaining. 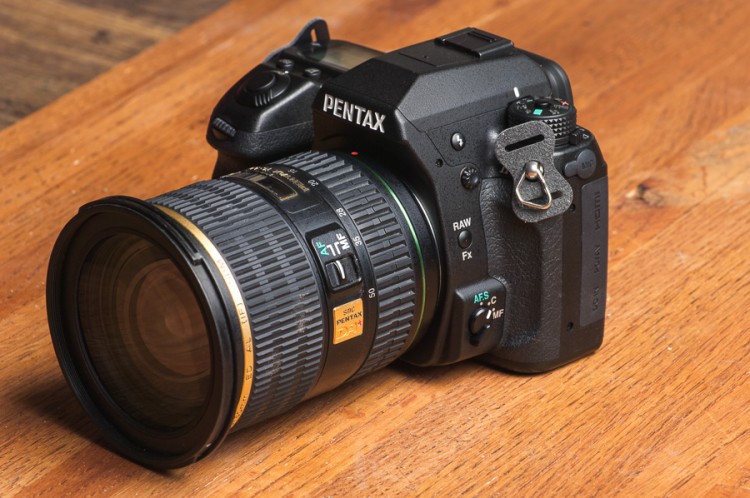 The K-5ii-s is a fine camera with high image quality and a small and light body with mostly great ergonomics. For me it was an awesome upgrade (going forward in time three DSLR generations of image quality and processing power) for a third the cost of the D600 I was looking at.

The overall speed of the camera is great, the 7 FPS will be great for sports, and even the speed of taking bracketed shots is almost startlingly fast.

Given that Pentax doesn’t seem to be going to a full frame system any time soon, regardless of the “K-3 just around the corner” rumours that pop up every few months, I have no problem recommending this camera to existing Pentax users. I can’t speak to the improvements over the K-5, but if your body is a few years old and you’re itching for an upgrade, this is a good one.  I also have no issue recommending it to new users looking for a DSLR who aren’t already “locked up” in an existing system, or anyone looking to jump ship from Nikon, Canon or Sony into something fast, cheap and gorgous.

[1] As I was travelling fairly quickly to a far away land, the weather sealing and familiarity with the Pentax system and lens capabilities kept me there. 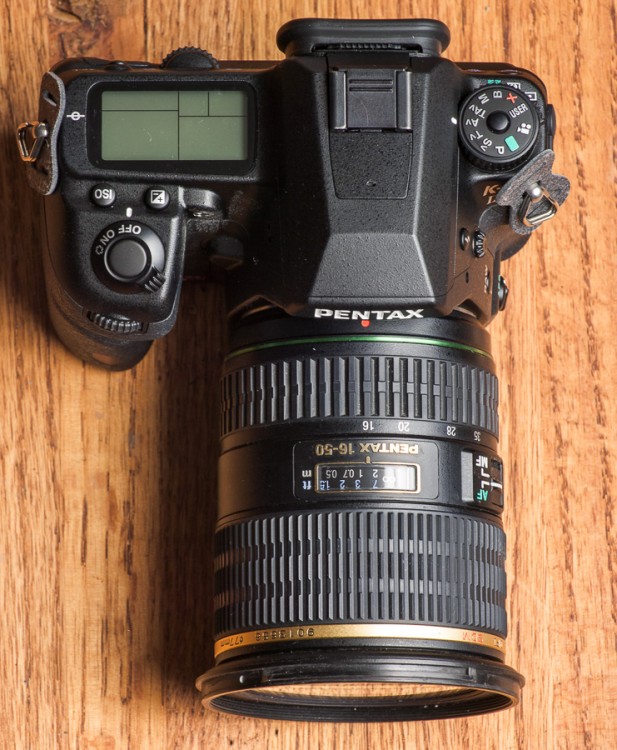 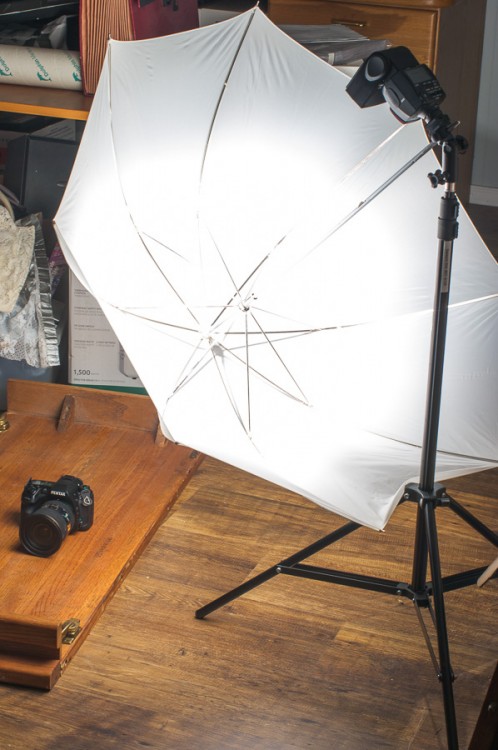