There are probably a hundred “2016 MacBook Pro impressions” posts out there, but this one is mine, maybe I’ll mention something in it that you didn’t see somewhere else? 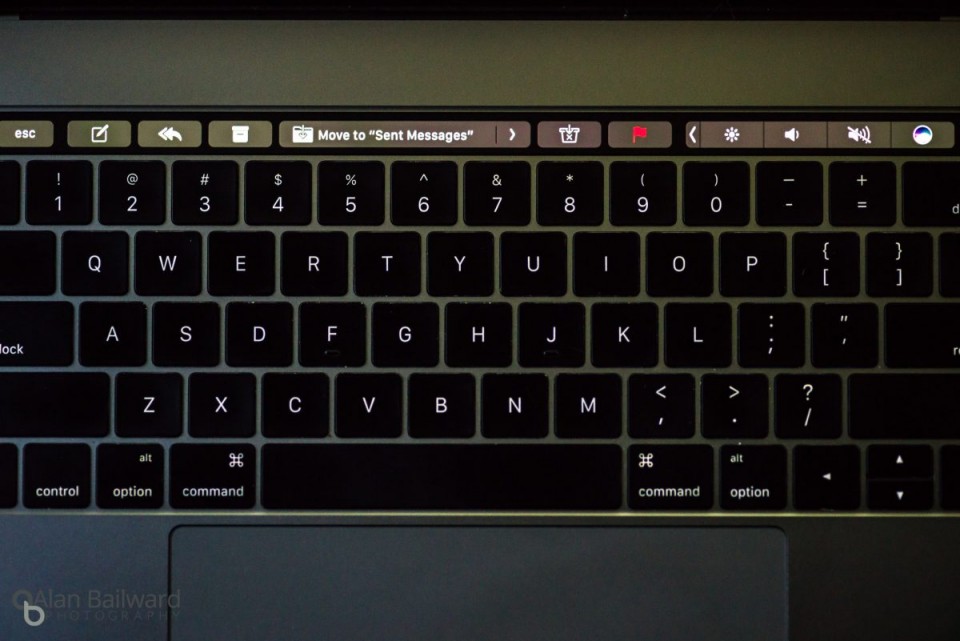 Touchbar and keyboard in Mail

I ordered it not long after it was announced (after securing a sale for my current laptop), and after waiting more than a month (the tyranny of build to order) it showed up at my door two days ago.

I wanted to do a proper unboxing, with the reverence and ceremony that seems to be required of Apple products, but by coincidence the evening I got it I was going out to meet some friends at the local Starbucks and there was an emergency at work, meaning that the unboxing was more of a frantic ripping off of the protective film and hitting cancel and next as fast as I could through the first run setup so I could get to a terminal so I could try to find out why there were websites not responding.

The unit I purchased was the middle of the road version of the 15” with TouchBar, with upgraded disk (up to 512G, as the 256G on my current laptop feels really constricted) and upgraded GPU (Radeon Pro 460 4G).

The 2016 is a bit smaller and feels lighter than the previous model. The bezel is smaller giving the same amount of screen size. As Apple-Watchers know, the companies obsession with thinner and lighter has meant that it’s also noticeably thinner and lighter than the previous model. Both good things in my opinion. Picking it up off the desk it is noticeably lighter. The hing has also been redesigned apparently to allow you to open it up without it being too stiff and causing it to pull the bottom off the desk (as it’s really light) but not flopping around (if it’s not secure enough). 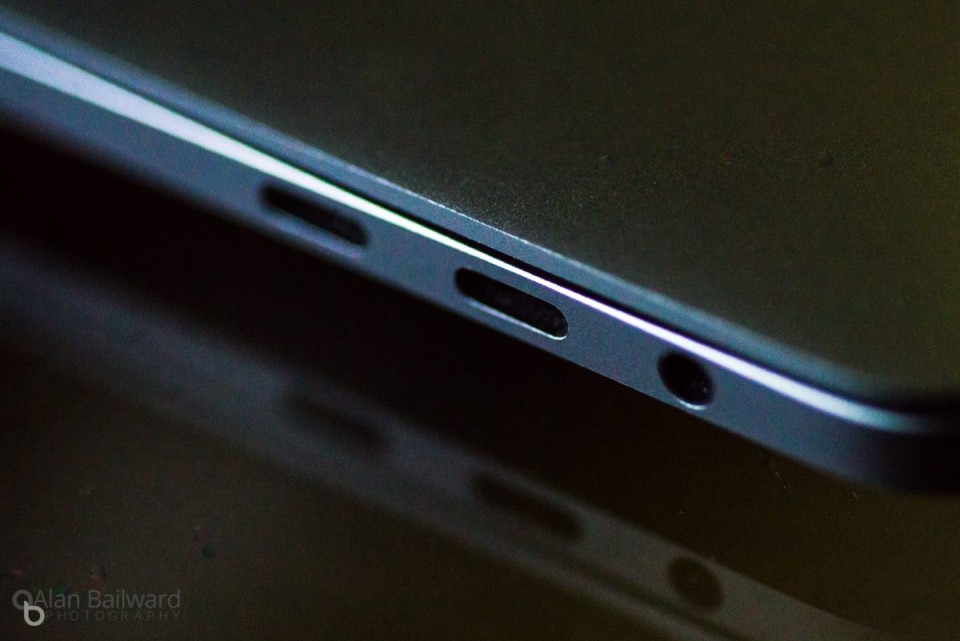 I won’t go into the dongles. I bought a USB-C SD card reader and two USB-A to USB-C adaptors…. I’m not super happy about it, but I also realize that by the time this laptop is obsolete and it’s time for an upgrade, a majority of peripherals will probably be more USB-C, so I’m ok with being part of the awkward transition.

The disk is fast. Like, really fast, at least according to the benchmarks. I see about 800-900mb/s write and 1300-1600mb/s read speeds according to Blackmagic Disk Speed Test. The CPU is a bit faster than my previous MacBook, but honestly I am not seeing a huge difference. It’s faster don’t get me wrong, but it’s not “2009-2016 faster”, it’s definitely “2014-2016 faster”. It’s not like I was expecting a massive difference, so this is honesty pretty expected.

The keyboard takes some getting used to for sure. I never used the “MacBook Zero” so I am not sure how it’s keyboard feels, but this new one is…. different. Not bad different, just different. I suspect it’s one of those things that you get used to and will stop noticing after a few days of typing.

Update from a few days later: Yea, it’s still noticeably different, but it’s not a big deal. Now back to the review…

One thing that will take a bit to get used to. The arrow keys have changed from the traditional “upside down T” formation that’s graced the last few (or more) generations of MacBook to a new setup where the left and right keys are full height. This probably makes sense somehow (bigger keys for left/right which are probably hit more or something), but not having the spaces (in the upside down “T” formation) to put your fingers to find the location makes things a bit annoying for quickly finding your place on the keyboard.

Other than that, the keys are bigger, easy to hit and have a lot less travel than the last version. It also has an oddly “smooth” feeling. Not that the keys are physically smooth, but just somehow typing on it is smoother. It may be just the new keyboard feel, or that these keys don’t have years of crumbs accumulated under them.

The TouchBar – Cool With Untapped Potential 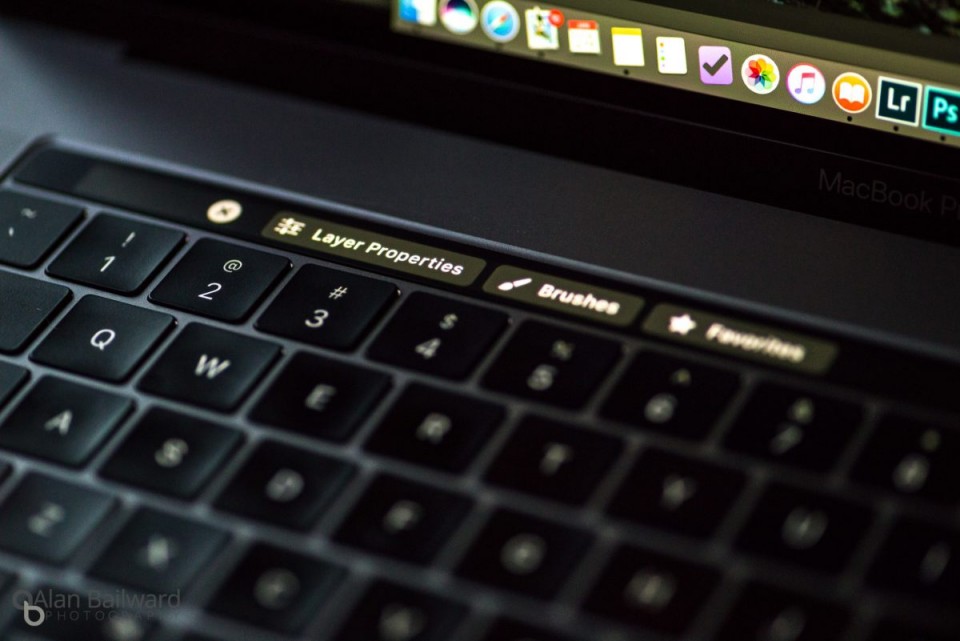 Honestly I haven’t been using it much. Most likely it’s because it’s new and I’m still used to my previous workflow of ignoring the keys on the function row unless I needed to adjust the brightness or hit play/pause for playing music. That said, when I do….

I hit ESC reflexively often, dismissing dialog boxes, when I’m in the terminal, and so on. I always have this moment of feeling like it’s not hitting a real key. As others have said, a bit of haptic feedback would be great.

Outside of that, using it as designed, as a set of non-keys to be used by apps as they please, is pretty bloody cool. In Photoshop I can adjust the size of a brush, with a tap and a slide, vs hitting [ or ] multiple times. Typing it offers spelling suggestions, which I generally ignore due to the fact I’ve been touch typing since I learned to type in grade 9. Other apps have implemented various degrees of usefulness with the TouchBar, and I’m sure it will only get better.

Oddly in my living room light (darker than the Apple Store) both the resolution and clarity of the TouchBar seem less so than the first time I saw it in the Apple Store. More likely my old eyes though.

Right now the only things that use TouchID are:

I see this expanding as more and more laptops show up in the world and as more apps are updated to take advantage of it. Honestly it is super-cool to just touch my finger to the little button to log into my laptop, or authenticate my 1Password vault.

This thing is huge. You could play a full game of cricket on it and still have room left over after. I’m not sure I need this much trackpad, but I suspect after a week or two of use my other laptop’s trackpad will start feeling tiny. This thing is even bigger than the Magic Trackpad that I use at work. Seriously, it’s huuuuuuuuuge.

One big downside I’m finding is that when doing work and with with my hands resting naturally (with my left hand on the keys and my right hand mousing) I’m triggering the right click action much more. I’ve had zero issues with the palm rejection, it never seems to trigger false clicks or mouse movements, but with my left palm on the trackpad and my right hand clicking the “two fingers to trigger right click” is happening more. Again, probably just an adjustment of where my hands touch and when to unlearn some positions, but a bit of an annoyance.

That all said, it feels… smoother somehow. Hard to describe, but when mousing around it, like the keyboard) has an odd “more smooth than smooth” feel to mousing around (not physically smooth, it’s got the same physical feel as previous trackpads).

Obviously the screen is beautiful. I haven’t had the chance to compare to the old one, or see what people see with “wide gamut images”. It looks just gorgeous though, but not a hugely noticeable improvement over the previous 2014 model. 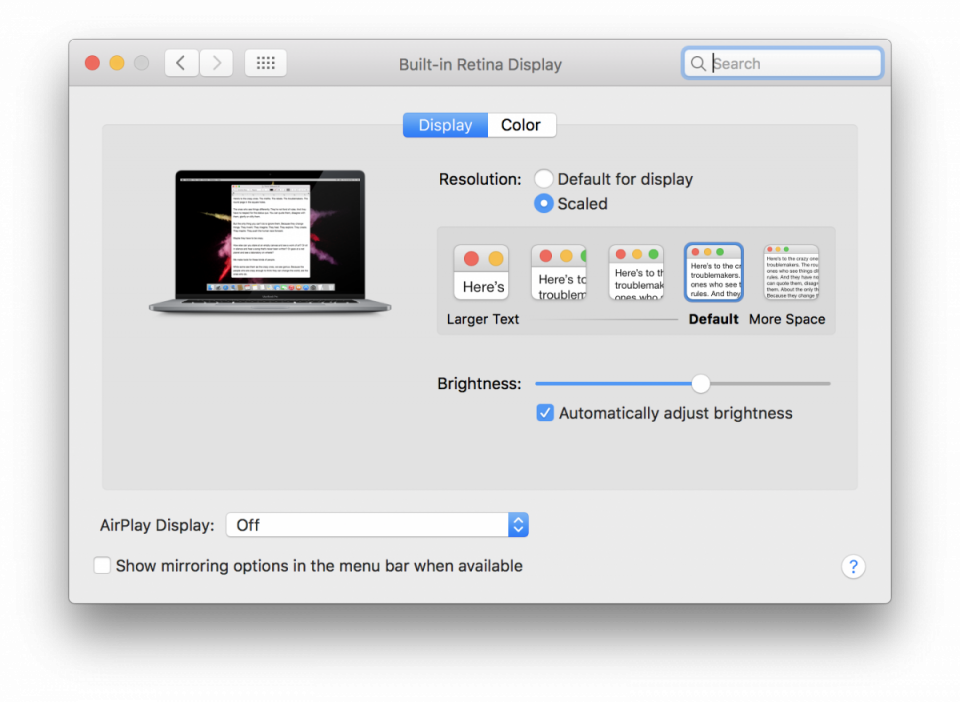 One interesting change to the defaults is that in the previous model, the default “best for display,” “scaled for retina setting has gone up one notch. On my 2014 model, the setting was equivalent to about 1440×900 by default, and of course you could set the system to scale higher or lower to give more or less desktop space (and consequently smaller or larger fonts and elements). This version the setting is up one to give slightly more desktop space by default (about a 1680×1050 resolution). I’m flipping between the default and bringing it back down one step in the resolution depending on how the light in the room is and how my 41 year old eyes feel.

The last bit of the hardware round up is the speakers. I’ll be quick… not only is it cool to tap the speaker icon in the TouchBar and then slide to adjust the volume, but the sound is great. Nowhere near as good as “real” speakers of course, but at least twice as loud as the previous model with no distortion even at high volume. I have no idea how speakers this good and loud fit in a thinner and lighter machine.

Lightroom is what I use this computer for, and I’m very familiar with how it works and feels on my old laptop, so I have a fairly good feel for the difference in the new machine. 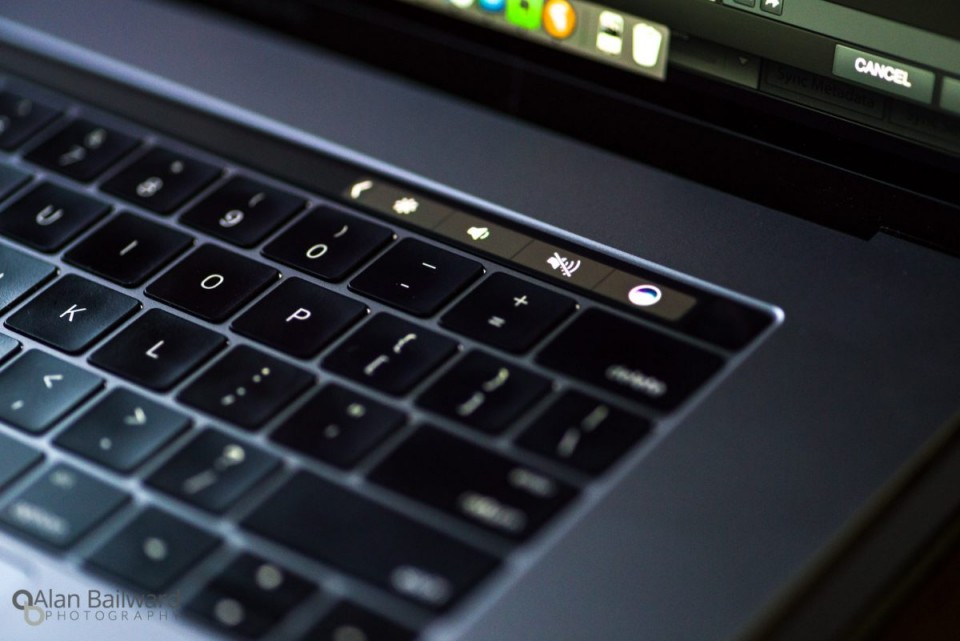 It’s a bit disappointing in some areas…. I was expecting the more powerful GPU to allow me to do spot corrections on 36 megapixel images smoothly and easily, but in some ways it almost feels slower. This might be something more specific to the images I’m working on however. Overall Lightroom and Photoshop run a bit faster than before (faster for things like loading and saving images) though some of this may be also due to recent Lightroom updates. The utopia of ‘hit the d key to develop and be instantly ready to develop the image’ isn’t quite here yet.

I’m making no attempt to rate this with any sort of normal rating scale, but I’d say that on a scale from “meh” to “HOLY SHITBALLS I’M FLYING” it comes in at a solid “decent!”. This is an expensive laptop don’t get me wrong, and I’m hoping it will be awesome for a good five years or more. If you have the 2014 the upgrade probably isn’t worth it to be honest, but if you’re in the market for a new MacBook this is a great machine, beautifully designed, and (if you can deal with dongles), ready for the next generation and the next changes in the hardware market.